Javier Boyas, associate professor in the UGA School of Social Work and Master of Social Work (MSW) program director, started his career at UGA in 2018. Since his start, his focus is centered around the Latinx community and the populations large shift to Georgia and other Southern states. 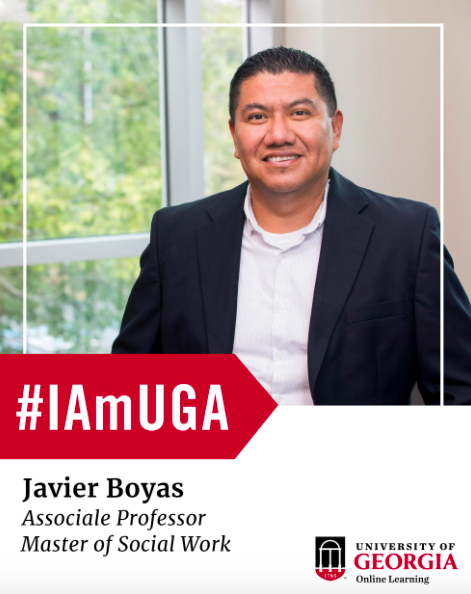 Boyas received a baccalaureate degree in sociology and Spanish from Western Illinois University and his Master of Social Work degree from the University of Michigan at Ann Arbor and a Ph.D. from Boston College.

His research aims to build knowledge that contributes to effective intervention and prevention approaches to reduce and eliminate health disparities among communities of color, particularly among the Latinx community.

Boyas says he believes research is more valuable when there is something meaningful that can have an impact on the populations and communities with whom we partner.

“I could not think of anything better than to immerse myself in an academic community that shares that social justice value,” Boyas says.

Boyas chose to begin his research at the University of Georgia’s School of Social Work due to its “great reputation” of being committed to issues of social justice.

His greatest highlight since coming to UGA is being named to the position of MSW program director, one of the largest academic programs in the School of Social Work. He says this is also a tremendous opportunity that will allow me to shape, guide and lead this graduate program.

Yet another highlight for Boyas is mentoring and supporting the next generation of scholars, which is an academic and personal goal for him. Through his classes, it’s Boyas’ hope that his students understand the complex social problems many populations encounter.

Throughout his research and teachings Boyas hopes that his students gain an understanding that social work is a profession. He says lots of people want to help others, but it takes more than a big heart to do so.

“My ideal student is someone who is inspired, proactive and self-motivated,” Boyas says.

As a professor for the newly implemented Online MSW program, Boyas says the program should provide access and flexibility to earn an advanced degree in social work and eliminate barriers such as travel time to get to campus or not being able to access a campus due to distance.

“The reality is that a lot of people in various parts of the state don’t currently have that option, and until now there was not a fully online program for social work at any public university in Georgia,” Boyas says.