The Rev. Dr. Martin Luther King Jr., once said that courage is an inner resolution to go forward in spite of obstacles.

That resolution echoed through the theme of the 2022 Martin Luther King Jr. Freedom Breakfast—“The Power of the Dream: Footsteps of Courage.” 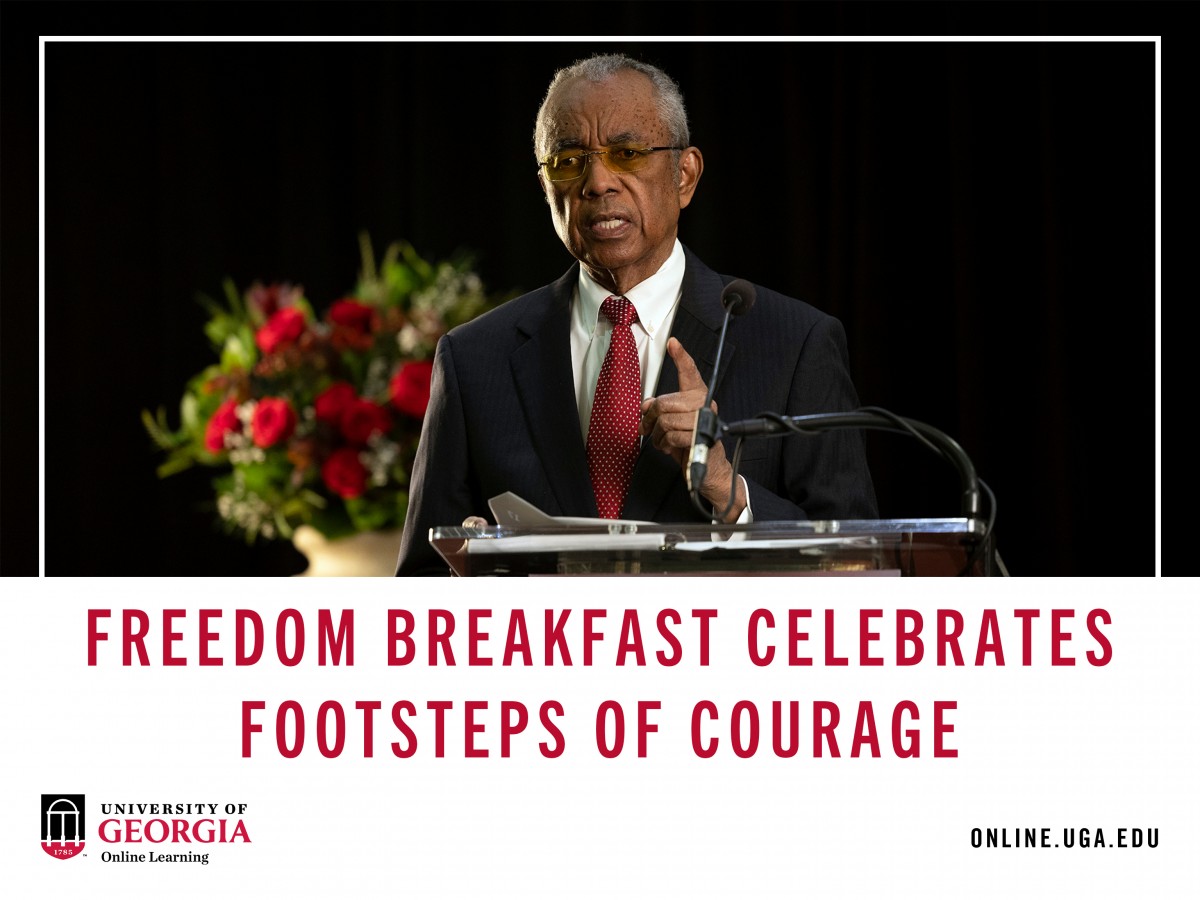 “This special event reinforces our commitment to honor the legacy of Dr. King and those who continue to follow in his footsteps,” said UGA President Jere W. Morehead. “Dr. King remains one of the world’s most influential leaders and a champion for justice and equality whose legacy continues to inspire us all.”

King proved to be a significant influence on Arthur Dunning, who delivered this year’s keynote address.

Dunning, who most recently served as president of Albany State University, has had an extensive career in higher education for nearly 35 years in Georgia. He served for several years as UGA’s vice president for public service and outreach and was instrumental in the development of the university’s Archway Partnership. But in 1963, he was a young airman serving in Taiwan, learning about the extraordinary events taking place that year through newspapers and viewing them from a different perspective.

“He [King] gave us a new way of looking at America,” Dunning said.

At the basis of King’s legacy is the idea that one should be judged by the content of their character, not by the color of their skin.

“Martin Luther King gave us a path forward. He really gave us a blueprint for how to get along, how to think about each other, how to live together,” Dunning said.

Dunning reiterated how important that is in a country like this one.

“He gave us a way forward. It’s up to us, at this point in time, to look at this multi-racial, multi-ethnic and multi-religious nation called the United States of America and try to figure out how we’re going to make this experiment work,” Dunning said.

The Freedom Breakfast, held annually since 2007, honors the legacy of the late civil rights leader and recognizes local community members dedicated to contributing to race relations, justice and human rights with the President’s Fulfilling the Dream Award.

This year’s recipients are:

“It is my hope that the individuals recognized today will be living examples for each of us on how we can continue to live a life that emulates the hopes, values and dreams of Dr. King,” said Alton Standifer, deputy chief of staff to the president.

As part of the event, Rayvon Love, a senior in the Hugh Hodgson School of Music, performed “Lift Ev’ry Voice and Sing” and “The Impossible Dream” from “Man of La Mancha.”

Additionally, students from the Clarke County School District shared some of their writing and artwork celebrating King’s legacy around the theme “Unity: Working Together for Hope and Peace.”

“I hope this program inspires conversation and connections that not only inform our community, but also our humanity,” said Michelle Cook, vice provost for diversity and inclusion and strategic university initiatives. “The steps we’ve made, are making this very moment, and will continue to make are the steps that will lead to a brighter, more just and more inclusive future.”

Watch the recording of the Freedom Breakfast here.