One of Henry “Hadjii” Hand’s personal missions is always trying to get better…and he is trying to encourage his students to do the same. 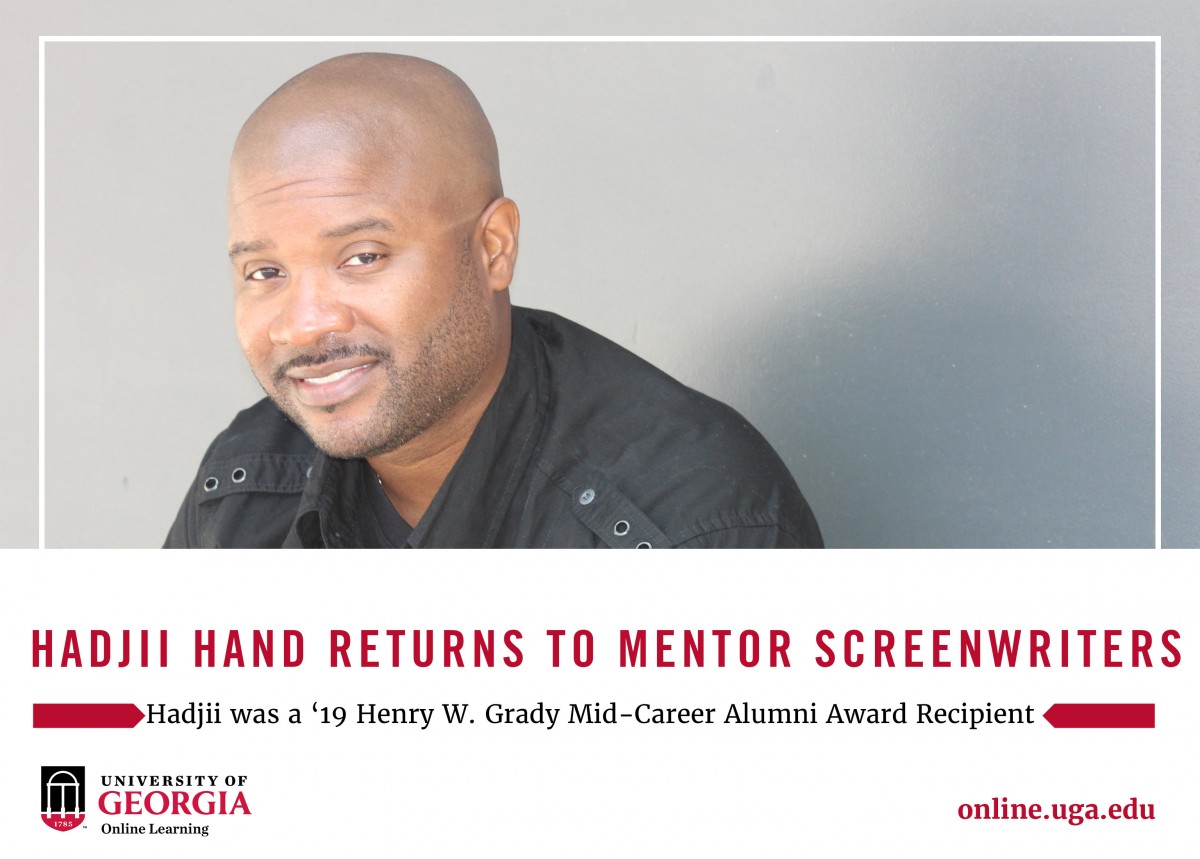 Hand is one of the mentors in the screenwriting track of the Narrative Media MFA program offered at Grady College, an in-depth program with a focus on the art and nuance of writing for television, film and video.

For Hand (ABJ ’98), returning to Grady College to mentor graduate students is a significant change compared with the undergraduate students he taught in his introductory telecommunications classes in the early-2000s.

“With undergraduates, you are just trying to teach the basics, but with graduate students, you really have the time to dive deeper and talk about how to develop better characters and make outlines really pop,” Hand said. “The one thing I have always appreciated about students, whether they are undergraduates or graduate students, is that they all bring a sincere passion to whatever reason they are here.”

Although he is familiar with the academic setting from his own time as a student and later as an instructor, it’s his experience as a producer that he draws from the most when working with students. He is the producer of the feature film “Somebodies,” that he admits is loosely based on his time as a student at the University of Georgia.  “Somebodies” premiered at the 2006 Sundance Film Festival and won a Golden Thumb Award from the late film critic Roger Ebert. The film was adapted into a television series for BET, which Hand wrote, starred in and served as the executive producer. Recently, Hand has worked as the consulting producer of the television series, “Step Up,” on YouTube Premium. He is always working on writing material to get his own projects off the ground.

In recognition of his accomplishments, Hand accepted the Henry W. Grady Mid-Career Alumni Award presented by Grady College in April 2019.

Hand said the biggest lesson he has learned working in the entertainment industry, is the realization that not every piece of art is for every person, and it is the writer’s responsibility to  have a sense of what’s important and to stay grounded.

Hand explains: “If you have some kind of mission statement for yourself, those criticisms, whether they are for you or against you, are easier to take because you can decipher what’s important and what’s not. If you are just writing stuff trying to please everyone, you are really going to get hurt.”

Hand said it his mission to share with his students the fact that writing is a never-ending process that is never mastered. He finds that audiences are always changing what they want to see.

As an instructor in the MFA program, Hand joins the students twice a year for a week-long residency at the University of Georgia where they participate in table reads and guest lectures. When the part-time residency is over, he works one-on-one with a few students each semester as their mentor, helping them hone their projects and sharing writing advice. These teaching sessions take place via phone or email every week or two.

“I get the biggest satisfaction working with the MFA students,” Hand continued. We are here to help create some really cool projects that hopefully will help someone go out into the marketplace or help them get their degrees to help with education.”

Together, they will all be better.

This article was originally written by Sarah Freeman of the Grady College of Journalism and Mass Communications.