Athens’ once vibrant music scene has been muted. And for now, the town just isn’t the same. Especially for the musicians themselves.

The pandemic’s impact on the music community last spring was swift. One Athens-based band was onstage in the middle of a set when its musicians learned the rest of the tour was canceled. In a matter of days, people in the industry lost their livelihoods and their outlet for social connection and self-expression. 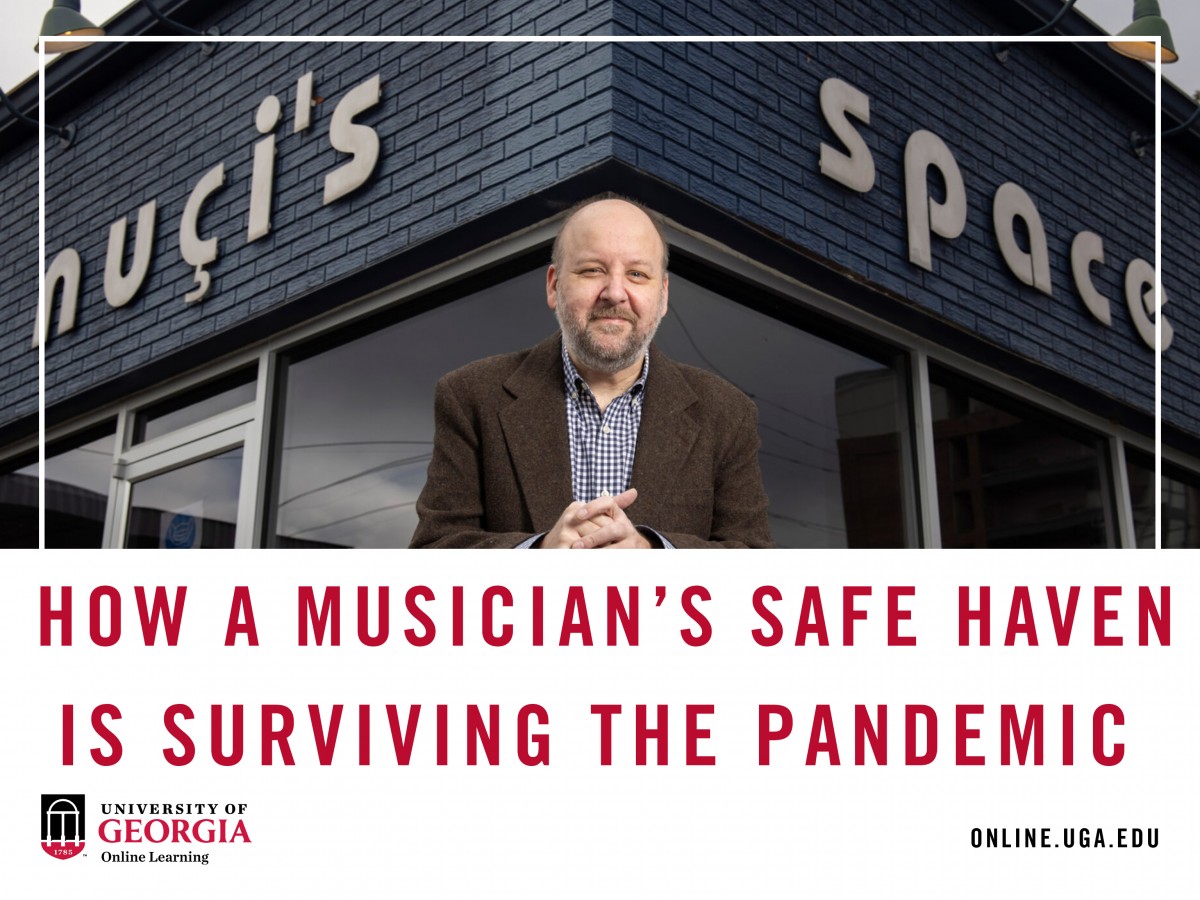 Like other Athens’ nonprofits, Nuçi’s Space has stepped up to fill a void.

Nuçi’s Space was founded in 2000 by Linda Phillips after her son, Nuçi, an Athens musician and UGA student, took his life. She envisioned a haven for musicians who battled depression and similar illnesses. So Phillips, who died in January from pancreatic cancer, founded an organization to help them find treatment.

He’s also now an elder statesman of the Athens nonprofit community and helps teach future nonprofit leaders as an adjunct professor in the School of Social Work’s Institute for Nonprofit Organizations.

In better times, Nuçi’s Space, located in a blue-painted brick building just down the hill from Downtown Athens, offers an array of services, including mental health counseling, affordable practice space, and a place to create a supportive community. Like other organizations that rely on face-to-face interactions, Nuçi’s Space has had to adapt.

At the beginning of the shutdown as every-one was sheltering in place, Sleppy began making calls to ensure that clients could still access mental health services at a time when many were critically needed. He quickly learned that many in the community were running out of money with the loss of music and side gigs. (This was before federal relief checks were sent out.)

So, Sleppy started raising money for people in the industry who had lost a steady paycheck. Nuçi’s Space was able to raise and distribute $130,000 just to help people get by.

The nonprofit’s staff also organized Zoom calls to keep people connected. Slowly, Nuçi’s Space has tried to return to something like normal. They offer limited opportunities for practice space at their facility. Counseling sessions are mostly virtual but also outside when the weather is nice enough.

Still, the pandemic has taken its toll.

Some clients who have battled addiction slipped into old habits during the early period of forced isolation. One client with a history of depression and suicidal thoughts took their own life.

“For a lot of people, having those support systems in place is everything,” Sleppy says. “When they get stripped from you, it’s hard to adapt.”

“But,” Sleppy adds, “the local community has really stepped up, and the creative community is determined to endure.”

“There’s not a better community of people than artists and musicians,” he says. “We’re pretty tough. And we’ll get through it. We’re adapting, and that’s what we do well.”