Studying in a graduate program while working a demanding job is no small undertaking. Add the demands of becoming a first-time father, and for many students, that would be a recipe for disaster. But, not for Matt Pearl. 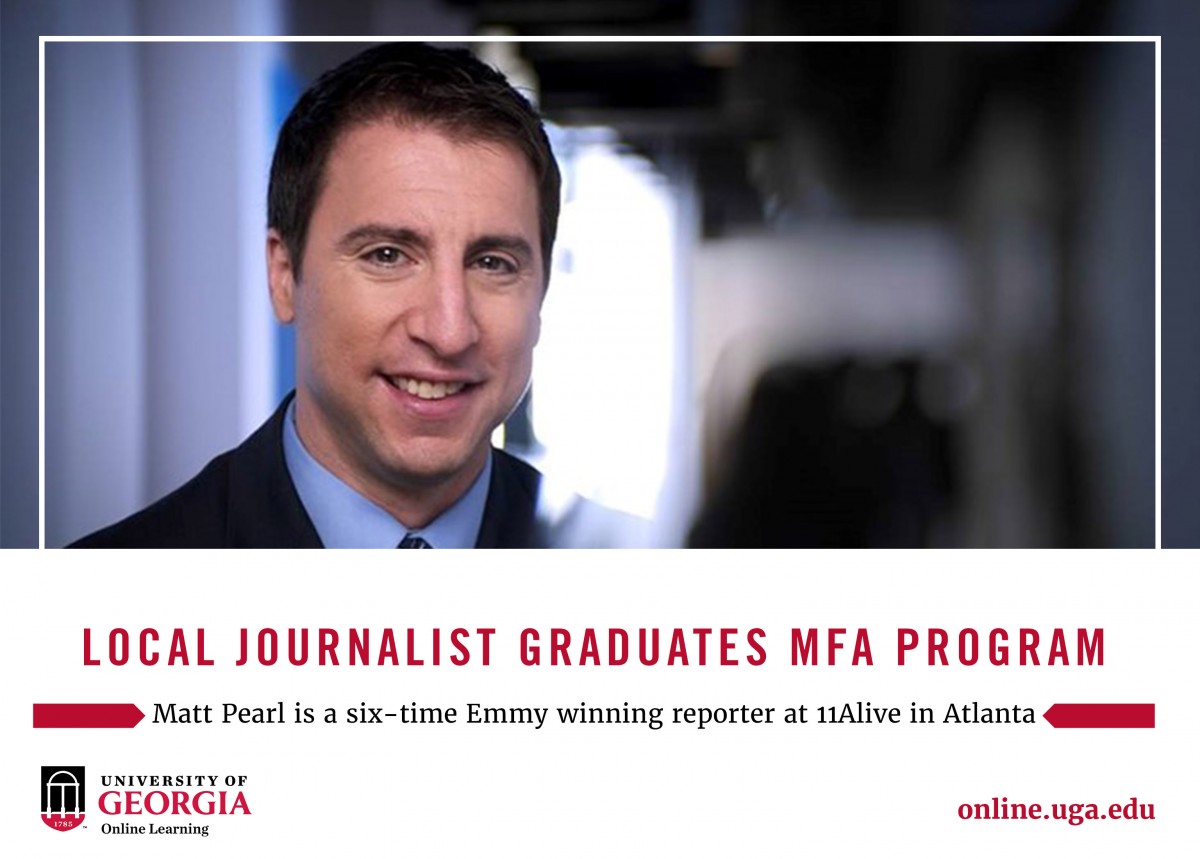 “That’s one of the advantages of this program, because it’s so individually tailored, you really get the experience that you want out of it,” Pearl said of the MFA in Narrative Media program, from which he graduated August 3.

By many standards, Pearl already has a very successful career working as a reporter for WXIA-TV, and has won numerous awards including six regional Emmys just this past June. He has received accolades from the National Press Photographers Association, including being named the Solo Videojournalist of the Year in 2015. He has written a guidebook called “The Solo Video Journalist,” as well as regularly posting to a blog and producing installments of his podcast, Telling the Story.

Pearl was motivated to go back to school in hopes of taking on more am ambitious goals as a writer, and he began considering the MFA at Grady College at the recommendation of a friend, Emma Lacey Bordeaux (MFA ‘17), who was in the first cohort.

Multiple benefits to the MFA program for Pearl included the fact that UGA was close to his home in Atlanta, was relatively economical, and the fact that the MFA program is connected with a journalism college, unlike many other programs around the country. Additionally,  obtaining an additional degree that would allow him to teach, something he has thought about doing in the future.

One of the biggest considerations in going back to school while working is the time commitment, but that did not intimidated Pearl. He admits that it is a huge workload, but managing the extra workload is preparation for the future, and he sees it as an asset and not a distraction.

The biggest take-away for Pearl is the way he looks at his broadcast journalism differently after taking these classes. Many of his favorite video stories that he has produced over the years were those he crafted in scenes, however he has a more nuanced way of looking at scenes now and plans them with increased intention.

Additionally, the commitment and dedication of the mentors is what makes the program special, according to Pearl. The narrative nonfiction program has an impressive list of mentors including James Beard Award-winning author John T. Edge, CNN’s Moni Basu and Jan Winburn, writer and filmmaker Lolis Eric Elie and professor emeritus Patricia Thomas, to name a few.

“I don’t think any program like this works without instructors who are dedicated to it and continually push you to get better,” Pearl concluded. “In each case, the mentors challenged me, forced me to ask questions about my writing that I haven’t thought about, and offered a different perspective based on life experience, based on background, based on their own paths as a writer. These mentors have very busy lives, but they carve out this time for people who have that same passion and have that same desire to use writing to make the world a better place.”