Gallant had been waiting for several years for the low-residency MFA in Narrative Media Writing program to start, so it was a mere coincidence—and good timing—when he received a contract to write his first book within a few weeks of the first class.

Three years later, Gallant has his MFA degree in hand and is about to see his first book, “A High Low Tide: The Revival of a Southern Oyster” published. 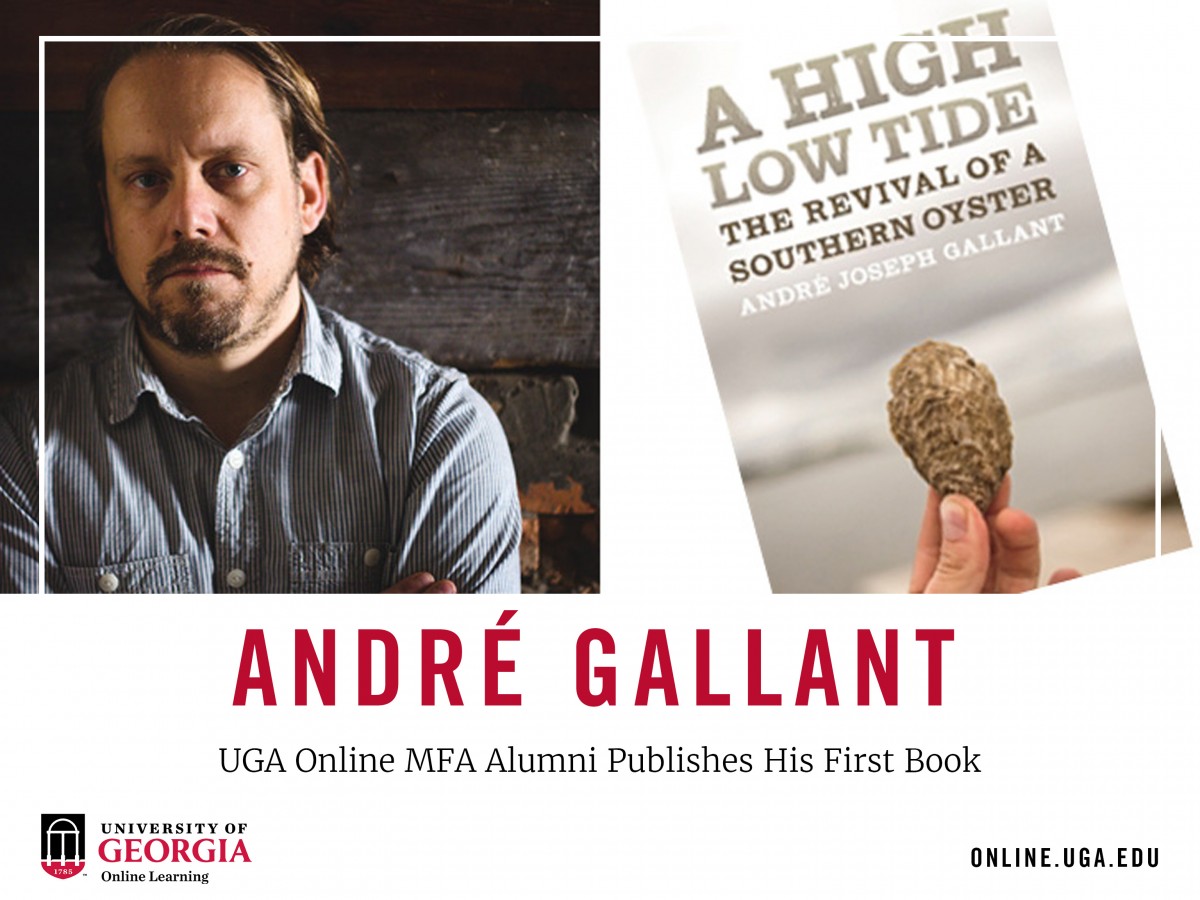 “I just knew there was going to be a story there,” Gallant said of the story of his new book.

In addition to his role as a newly-published author, Gallant juggles his freelance writing for publications including Atlanta Magazine, Garden and Gun and The Atlanta Journal-Constitution, with part-time teaching responsibilities in the Department of Journalism at Grady College.

“A High Low Tide” is a book that he had been developing since around 2012. Gallant’s interest was piqued when he was a journalist for the Athens Banner-Herald and received a press release from the University of Georgia. The release covered the efforts being made by researchers and  shellfisherman to revive the oyster industry along coastal Georgia. The state had been a top-producer of oysters in the early 20th Century, but that title had waned over the years due to economic and environmental shifts. Gallant started looking into the topic and writing about it more and more until he was encouraged to consider writing a book.

“A High Low Tide” details the process of aquaculture and the other programs that have been implemented to cultivate that industry and chronicles one champion of the efforts, Justin Manley. In addition to writing the text, Gallant also took all the pictures in the book.

Although the book may have become a reality even without the MFA, Gallant credits his education through the program with giving him more definition in creating a narrative arc, characters, structure and plot.

“The MFA helped me understand how to make the leap from journalist to non-fiction storyteller,” Gallant said. “There is no leap in ethics, there is no change in the core of what we do as journalists, but the presentation is different and what influences we use to tell the story are different.”

The MFA program is something that Gallant had been tracking since he earned his undergraduate degree. He had kept up with one of his professors and mentors, Valerie Boyd, who kept him posted about this new program she was developing.

Once he was enrolled the program, it brought even more clarity to what he wanted to be doing with his life. “Learning that term ‘narrative non-fiction’ was big for me,” Gallant said, “because I was able to label what I wanted to do—as a journalist, as a writer, as a human.”

Gallant also credits the program with giving him a degree to teach, a profession that runs in the family and one he has been doing part-time since he graduated.

“I am so proud to be teaching at Grady,” Gallant said. “It’s huge for me.”

It is the group of like-minded friends that formed from the class that helped him get through the second draft of the book and the program.

“To have the community that was built from that was amazing,” Gallant said. “Just to have these people you can call, or Facebook or email, who are just as obsessed with that work and to feed off of each another’s energy was really just invaluable.”

Would he ever think about writing fiction? Gallant admits that being a novelist was a childhood dream, but now that he has non-fiction writing in his blood, he dismisses the thought.

“Truth is stranger,” he concludes. “Non-fiction…that’s where it’s at.”

“A High Low Tide: The Revival of a Southern Oyster,” is set to be released on September 15. It is published by the University of Georgia Press.