UGA has an enviable history in higher education and creating programs of study that benefit all fields and passions. This is true of the Nonprofit Management and Leadership online certificate program and upcoming online Master of Social Work program as well. 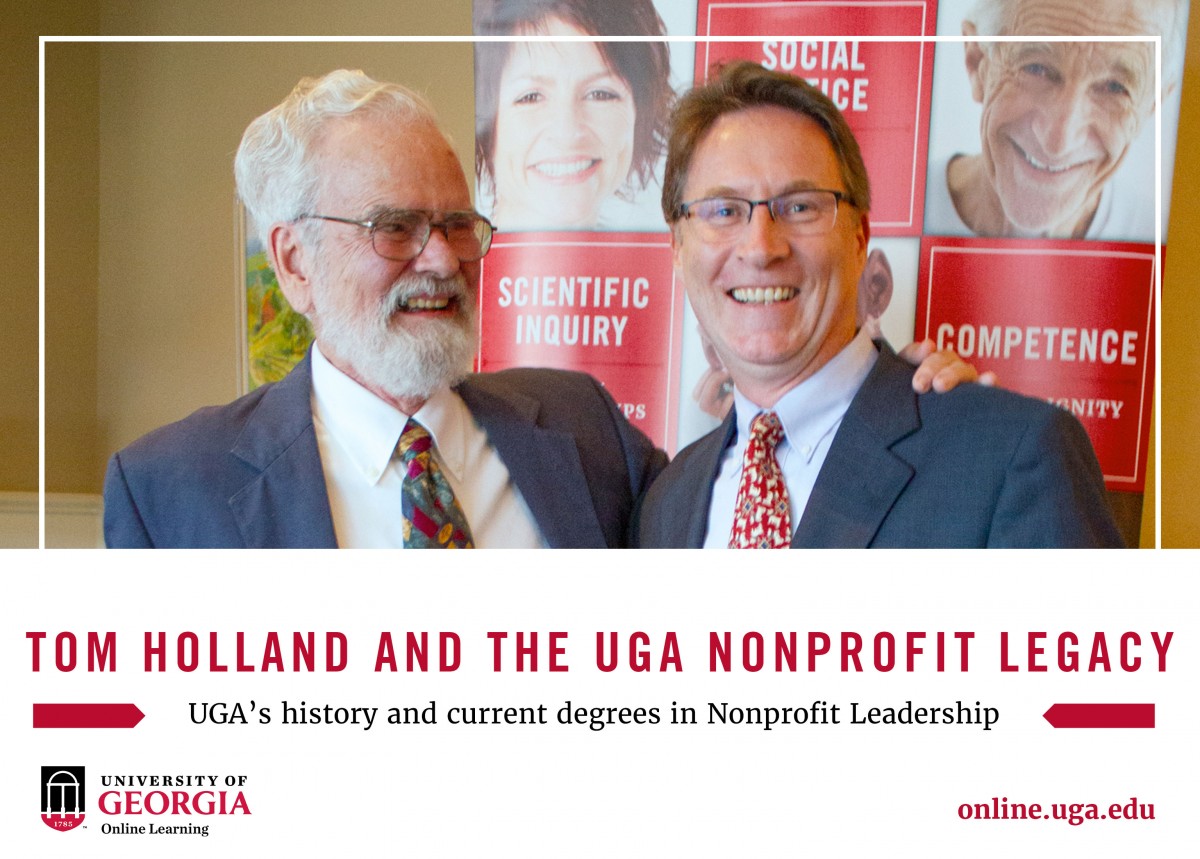 Today, the institute administers the master’s degree, seminars and workshops for the nonprofit community, and a graduate certificate program that is open to students in any major as well as to students not enrolled in any other UGA degree, and can be earned on campus or online. More than 500 graduates of the certificate and master’s programs have gone on to successful careers in both nonprofit and for-profit organizations. This program would not be where it is today without the foresight of Tom Holland.

A degree program gets started for all sorts of reasons, but usually because someone sees a need and has the resources to support it. In the case of the nonprofit graduate program at the UGA School of Social Work, Tom Holland saw the need, didn’t have the resources, but built a successful program anyway. Doing that was not on his mind in 1997. At the time the tenured professor was overseeing research grant proposal development for the school. He’d had success, but had lost his enthusiasm.

“It’s the first time a dean ever gave me that kind of feedback,” said Holland, whose output usually pleased his supervisors. “But she was right.”

“If you could push on any one thing, really dig in on it,” Yegidis continued, “what would it be?”

Holland thought about it. Then while visiting a gym in the old O’Malley’s building—the same building that now houses the School of Social Work—he met Jeff Brudney. A faculty member in the department of political science in Franklin College (now the Department of Public Administration and Policy in the School of Public and International Affairs), he shared Holland’s interest in nonprofit management. As they talked, their enthusiasm for the topic grew. People needed nonprofit know-how, but no one was teaching the subject in depth—at least not in the southeast. Why not, they asked each other, create a degree that would prepare and train leaders to strengthen the effectiveness of nonprofit organizations?

They were off and running. Convincing others wasn’t easy, though. “My biggest challenge was persuading the university administration,” said Holland, who had full support of social work faculty but little funding.

To oversee the degree, Brudney and Holland created the Institute for Nonprofit Organizations. The pair felt strongly the new program should be interdisciplinary, so Holland reached out to faculty across the campus, showing them how to add a nonprofit dimension to their classes. There were no textbooks, so they wrote their own. Holland says the program they established in 1999—the Master of Arts in Nonprofit Management and Leadership—is his proudest professional accomplishment.

Interest in nonprofit work continues to grow. “There’s still a hunger for that,” said Holland, whose books are often checked out of his local public library. “How do we manage better? How do we fundraise?” His queries reflect both his teaching and research philosophy, which he described as “learning how to ask the right questions.”

In recognition of his contributions to nonprofit scholarship and education, in 2018 the Board of Regents approved the Thomas P. Holland Distinguished Professorship in Nonprofit Management and Leadership. The position will increase research and contribute to teaching within the institute. It was funded through the UGA Foundation, Holland, his wife Myra Blackmon, the Riverview Foundation and multiple private donors.

“It is really appropriate that this endowed chair is being named for Tom Holland,” said Anthony Mallon, current director of the institute. “He played a central role in addressing the gap in higher education regarding nonprofit leadership, and in building a strong interdisciplinary program here at UGA.”

The full feature on Tom Holland is available in the School of Social Work publication, Connect.