Grant Utter graduated from the University of Georgia in 2017 with a degree in Entertainment and Media Studies and a New Media Certificate. He started working on some short films around Atlanta and then got a full-time job as a Product Information Specialist at OMI Halyard in Alpharetta. 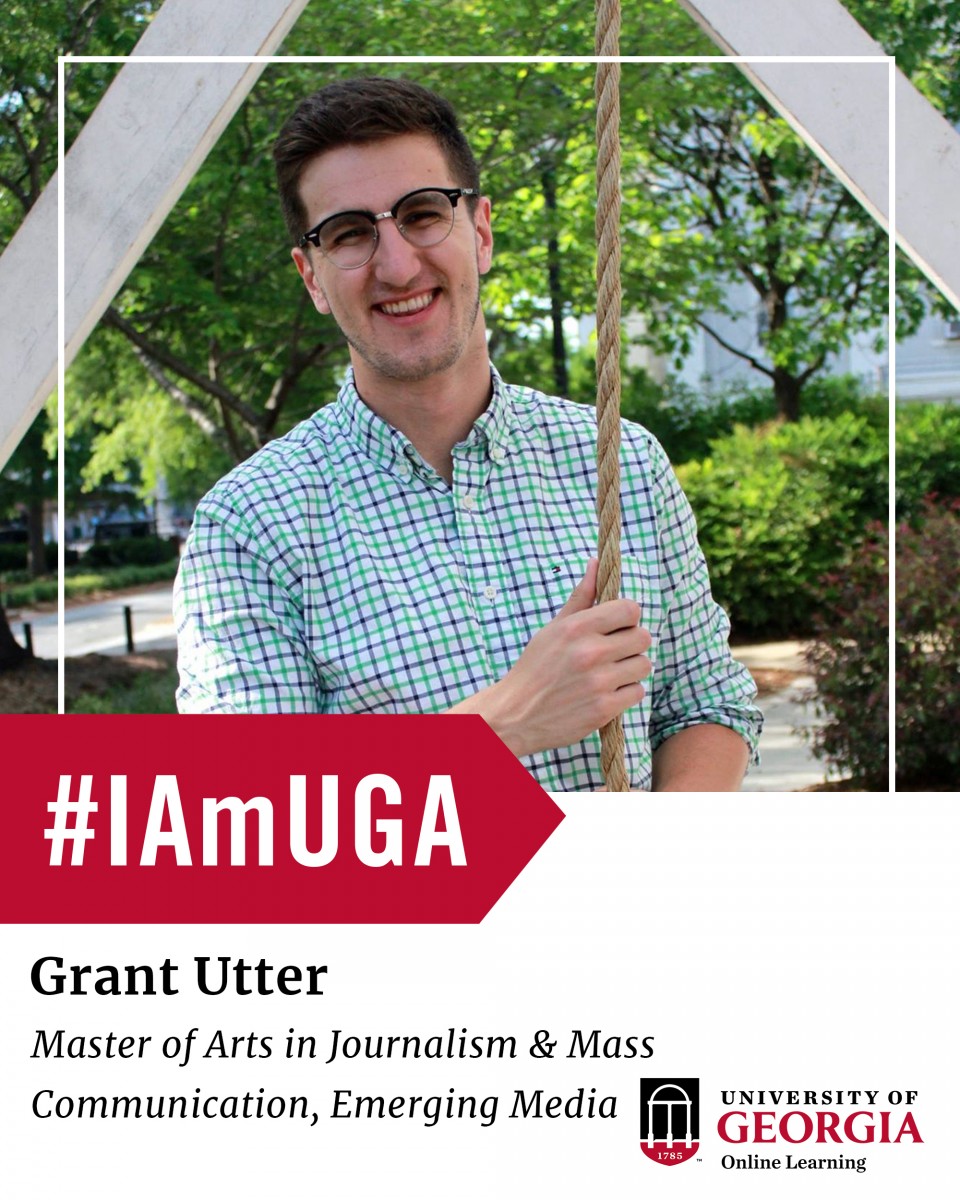 Since November 2019, Utter has been working as a Digital Content Creator in the Communications department at Oglethorpe University. He has found a passion for managing social media, producing videos, writing articles and marketing for the arts programs. After working at Oglethorpe for over a year, Utter decided to pursue an online Master of Arts in Journalism & Mass Communication, Emerging Media at the University of Georgia.

Utter applied to the Emerging Media Masters program because he was confident in the quality of education that he would be receiving from UGA.

“I took the New Media Certificate during undergrad and was really excited by the kinds of courses I took. Everything was collaborative, hands-on and fast-paced. On top of that, the instructors were really knowledgeable,” said Utter. “I knew that the Master’s program would be just as worthwhile.”

Utter also found that the weight of a degree from the UGA carried him into his career. “After landing my current job, I was explicitly told that I was selected from a large pool of applicants because I studied at UGA and had a New Media Certificate. It’s no secret that a degree from UGA holds a lot of caché and I’ll be proud to be able to say I have two degrees from the University of Georgia,” said Utter.

Utter chose an online program because he did not want to sacrifice his work at Oglethorpe University to pursue a higher degree. According to Utter, the asynchronous format of his classes has been helpful in his ability to work during the day and complete course work in the evening.

While Utter is only in his first semester of the program, he is optimistic about his future in the program.

“Not only am I learning about what's new and exciting in technology, but I am working together with motivated classmates and teachers who are knowledgeable and enthusiastic about their work,” said Utter.

For anyone interested in enrolling in an online program, Utter suggests being able to have enough time during your day to work hard and learn something new.

According to Utter, he has always been interested in the creative side of things. Utter hopes to be able to balance his creative side with a solid knowledge of technical skills. “There can be a lot of shortcuts to creating, but having the hard skills -- coding, design thinking, knowledge of the proper software -- will always set me apart in the job market,” said Utter.

Utter hopes to use his Master’s degree to continue working in marketing and communications at Oglethorpe University. While Utter loves Georgia, he aspires to move to a different place and work somewhere he can continue being creative and work with people who motivate and inspire him.

“Getting a Master’s degree is hard work, but if you are surrounded by the right people and working with the right instructors, the work can be exciting and the returns will be more than worth it in the end,” said Utter.