Stephen Bridges is a UGA Double Dawg having earned an A.B.J. from the Grady College of Journalism and Mass Communication in 2006 and receiving a master’s with distinction in the online Master of Education in Learning, Design and Technology (LDT) program in the Mary Frances Early College of Education in 2016. 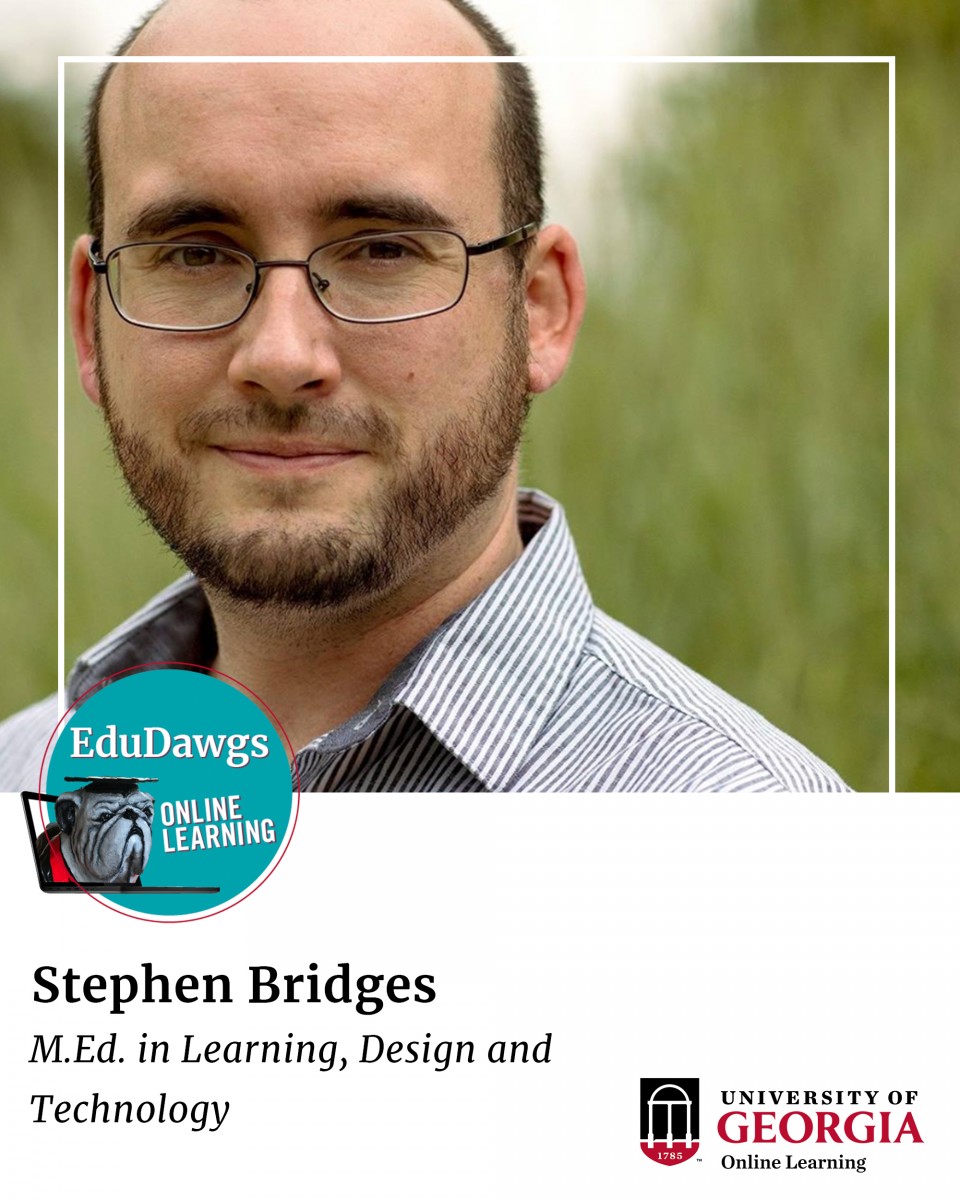 Before enrolling in the master’s program, Bridges worked as a video producer for the UGA Center of Teaching and Learning. Additionally, he worked for Daktronics, an event support company, as a videographer, replay operator, and director for UGA sporting events such as football, basketball and gymnastics.

Since Bridges was already a full-time UGA employee, he could take advantage of the Tuition Assistance Program, which provides free tuition and student fees to full-time employees, to obtain his master’s degree. “It just so happened that the LDT program transitioned to an online format just as I decided to take the plunge on a graduate degree,” he said, “Perfect timing.”

As a working professional and family man, Bridges realized that his time to engage with course studies was limited, and the LDT program allowed for a more flexible daily schedule.

“The online LDT program’s combination of asynchronous content combined with weekly  evening synchronous meetings melded quite easily with my schedule,” Bridges said. “I’m thankful to my wife, who took care of the kids on those nights.”

Bridges found that the most interesting aspect about the LDT program was  interacting with clients.

“Interacting with real-world clients who needed actual, deliverable content was incredibly valuable for building confidence in my own abilities as a soon-to-be instructional designer,” he said. “I felt a high degree of satisfaction and accomplishment seeing my clients implement the products that I produced.”

For those interested in an online program, Bridges said they aren’t any more difficult than in person programs. “Most online courses aren’t harder or easier than their face-to-face analogues; they’re just different,” Bridges said. “I spent the same amount of time on my coursework, but I was doing different things such as self-directed research and project development instead of taking notes during lectures.”

Bridges found that the online courses allowed him to make both personal and professional connections with his faculty and classmates. Additionally, the courses have benefited his career path by modeling real-world applications of the skills needed to be successful in the field.

“I feel as though the program has strongly impacted my approach to media production, particularly when it comes to creating instructional content,” Bridges said.