Atlanta playwright Natasha Patel is working with highschool students in Putnam County this year to highlight what it’s like to grow up in their community. 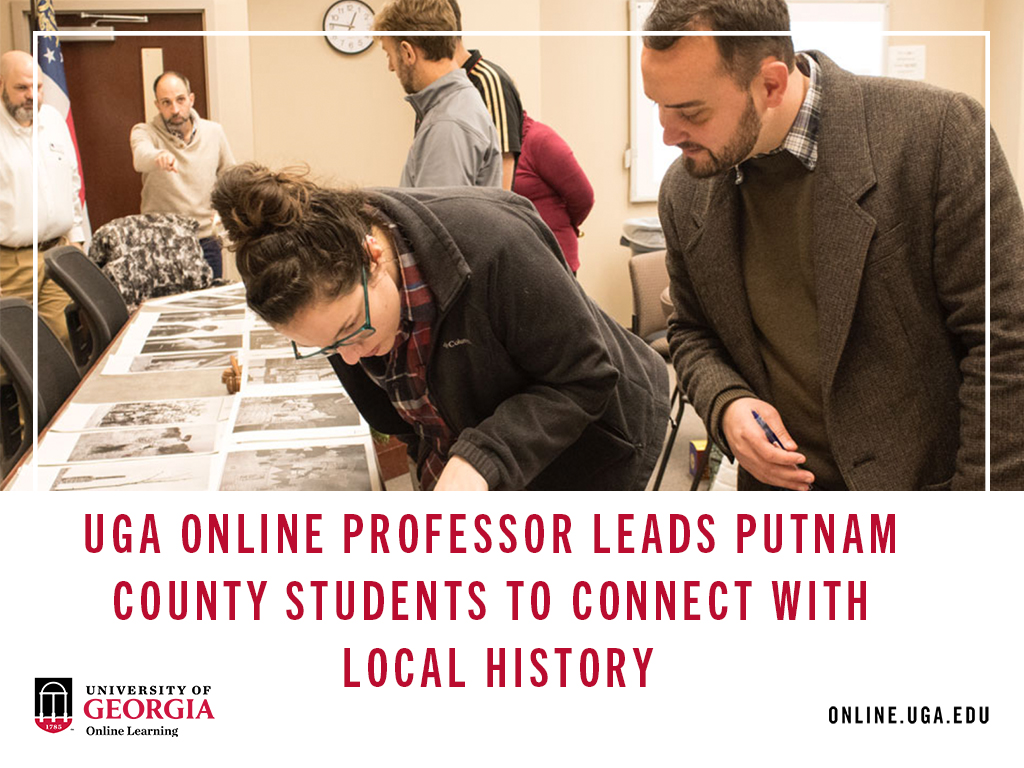 The scenes they’ve written draw on local historical artifacts, including photographs that capture the racial and economic realities of Putnam in the mid-20th century.

For some students, these photographs strike a familiar chord—the street corners where people once gathered nearly a century ago remain virtually unchanged today. For others, those images raise questions about the people in the photographs. What backstories did these people have? What challenges did they face? Were any students related to the people pictured?

By asking these questions, some students discovered new facts about their family lineages, but all of them gained a better understanding of the history of their community.

Theodore Kopcha is an associate professor in the Online Masters of Education in Learning, Design & Technology, Instructional Design & Development program offered through the University of Georgia’s Mary Frances Early College of Education.

Kopcha explains ““The goal of the Putnam Project is to pepper each of the grade levels with activities that are centered around introducing students to hyper-local history questions. By the time students get to 12th grade, they’ve had multiple lessons with different teachers, all of them putting their own spin on this model and addressing the standards that they are responsible for in their own unique way.”

Thanks to a new research-practice partnership grant from the Spencer Foundation, PCCSS and Kopcha will expand their ongoing partnership by weaving it together with Albany State University, a historically Black university in Albany, Georgia.

The grant will allow those involved in the project, including UGA alumnus Christopher Lawton, director of experiential learning of PCCSS, to more fully integrate these two aligned efforts to create a pipeline between PCCSS and ASU, while continuing to develop and shape the Putnam model as a pathway to student success.

One of the primary goals of the Putnam model is to engage high school students across all grade levels with their local past by participating in community projects, which have included researching enslaved communities in the 19th century, re-photographing historical photos, conducting oral histories with older community members who lived through segregation and investigating the history of agriculture and its connections to modern plant biodiversity in the county. By participating in these activities, students develop critical thinking skills and feel empowered to chip away at generational rural poverty.

“A lot of times the dominant narrative doesn’t always match up with what students are actually experiencing,” said Kopcha. “When the roots of that narrative are left untouched—or when other perspectives on that narrative don’t come to the forefront—students are left feeling like there must be something wrong with them because they’re not experiencing what they think they’re supposed to be experiencing from their community. And so that’s really at the heart of the model.”

The partnership between UGA, PCCSS and ASU aims to flip the paradigm that students need to succeed in college on their own without the support of their institution.

“Now that we have this direct connection with ASU, we’re asking how we can help students and understand what their expectations are coming in,” added Kopcha. “A common perspective of college is that you either sink or swim. And so, this is really trying to create a space where we’re going to work with each other to figure out what’s best for the student.”

For the project, Kopcha, along with doctoral student Katherine Walters, will continue supporting teachers in PCCSS by conducting professional development workshops with teachers and helping them create project-based learning activities that focus on integrating local history into classroom curricula across a variety of subject areas.