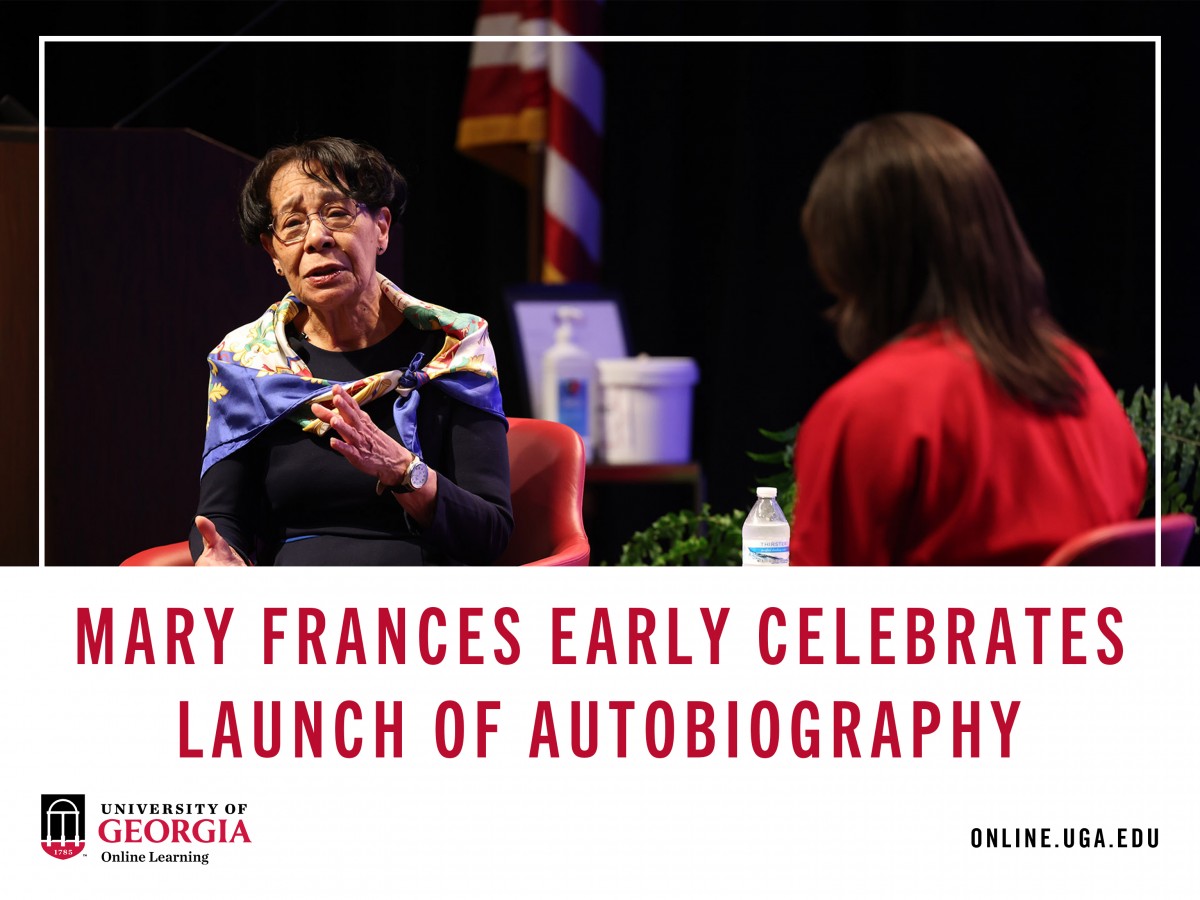 The event, held virtually Sept. 28, continued the commemoration of the 60th anniversary of desegregation at UGA and featured a conversation with Early and UGA women’s basketball coach Joni Taylor that covered Early’s childhood, her time at UGA and her lasting impact on both music education and desegregation in Georgia. The discussion, which was part of the fall 2021 UGA Signature Lecture Series, was co-sponsored by the Office of the President, the Office of Alumni Relations, the Mary Frances Early College of Education and UGA Libraries.

In “The Quiet Trailblazer,” Early shared her firsthand experience coming to campus in the summer of 1961, joining Charlayne Hunter-Gault and Hamilton Holmes, the first Black students to enroll at UGA. She became the first Black student to graduate from UGA with her master’s degree in music education in August 1962. UGA currently offers an online Master of Music Education degree through the Hugh Hodgson School of Music.

“When I decided to go to the University of Georgia, I knew that there would be challenges, but I’d had some challenges before,” she said. “You are capable of much more than you could even imagine.”

Early spoke about some of the struggles she faced getting accepted to UGA and added that she felt it was something that needed to be done. Her goal was not to be the first Black graduate of UGA but simply to help integrate the university.

“Things are not going to change until we do something about it,” she said. “This is my path, and I took it.”

Maurice Daniels, former dean of the School of Social Work, recognized Early’s efforts and learned more about her time at UGA while doing research for a documentary on Horace Ward, the first Black person to apply for admission to UGA.

“Had it not been for Dr. Maurice Daniels … I wouldn’t be sitting here,” she said. “My parents taught me that I should not blow my own horn. My goal was to be the best teacher that I could be. I wanted to be an inspiration to students.”

During the conversation, Early shared the importance that teachers, a strong education, and a love of literature and music had on her own life.

“Reading will take you places that you could never imagine,” she said.

One educator who stood out in Early’s mind was her band director at Turner High School in Atlanta. The band director at her previous high school asked Early, who had been playing music since she was 7, to play the tuba in order to join the band, but she much preferred the clarinet. The band director at Turner High School, however, asked Early what instrument she wanted to play. He told her the school didn’t have any more clarinets, but if she could purchase her own, she could play it. Early bought her first instrument with the allowance she had saved and was “happy as a bug in a rug.”

On Feb. 25, 2020, the university celebrated the naming of the College of Education in honor of Early, who also taught at Morehouse College and Spelman College and served as chair of the music department at Clark Atlanta University.

Early became known as the “The Quiet Trailblazer,” and perhaps that comes from another of her influences—the Rev. Dr. Martin Luther King Jr. Early attended Ebenezer Baptist during King’s time there and shared his belief in brotherly and sisterly love and non-violence. Early found her own ways to disagree without being disagreeable.

“I’m not quiet when I feel there is something that needs to be said. I just try to say it in a way that will not make people angry, hopefully, because when people clash, nothing is solved,” she said.

Early also spoke about the idea of “roots and wings” and what that means to her. Roots make things grow and prosper and create a strong foundation. For Early, her roots are her moral values. She considers wings to be those things people can do if they work to their full potential.

“You’ve got to be willing to put something in it to get something out,” she said. “Roots and wings are important because one keeps you grounded, and the other takes you as far as you want to go.”

The original article can be found here.

All online certificates and degree programs in the Mary Frances Early College of Education can be found here.